A few years ago we did a big trial and taste test of turnip varieties, and found some really great ones.

(Here is the final shortlist laid out for the 'blind' tasting session - so no one knows which is which until afterwards.) 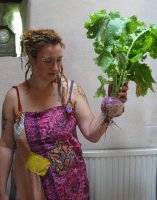 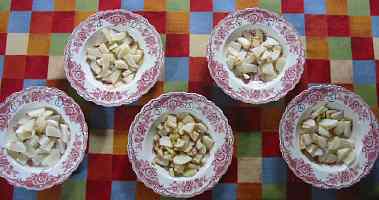 To eat Turnips in summer and autumn: sow from spring to midsummer (the most normal timing)

To eat Turnips in winter: You need Maincrop types. Sow early summer, eat fresh when small in autumn, and lift for storage overwinter.

White 40 Day Turnip
A great white turnip from Milan, this is a good first-early, sown in spring, for harvest of tender, flattened white turnips about six weeks later. 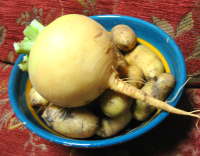 'Petrowski' Turnip
This great yellow turnip from Poland comes from our most recent turnip trials a few years ago.

It is particularly sweet and mild, and has been in great demand whenever we have offered it, as it has such a great flavour. Does well from a spring or late-summer sowing.

It is one of the best turnips we have tried, and many people have written in to say they really like it too.

We also discovered that it has leaves that are really nice cooked. So save the tops and boil them separately, like chard or any other green. Here you can see them served with butter, it makes a very nice side dish.

"For my money it is the best turnip I have ever grown. Very easy to grow and a great flavour both raw and boiled. I'll try it roasted next. I live in Barnsley, South Yorkshire and my allotment is a bit exposed. I must admit to not taking a lot of care over the plants (not much weeding etc.) but they still grew well and have produced a very good crop. ... Can't fault it at all. All the best." Tony

"I grew Petrowski turnip for the first time ever last year, and thought you might like to know what a brilliant crop it's proved to be even in a year when a lot of my crops were badly affected by the cold, wet summer. We started to eat thinnings as leaves in late spring, it continued into autumn as maincrop turnips (plus leaves that never became too tough too eat), and a late summer sowing gave us freshly harvested turnips for Christmas day. They are still going strong now, outside with no more protection than a mesh cloche, in my garden 1200 feet up in the Pennines!" - Judith 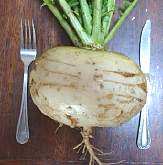 Giant Limousin Turnip
This one is reputed to be the most productive of all the old French traditional varieties. It is famous for reaching 10 - 12 inches diameter, but to be honest, from a purely practial point of view, you might prefer them a bit smaller as Ben is holding on the left.

We did try them leaving them to get bigger - and the one in the photo on the right was perfectly tender even at that size! We found this one to have a fantastic flavour that was a bit less 'turnipy' and subtly different from all the others, and it was without any hardness even when large.

'Navet de Nancy' Turnip
A classic French variety, from the seedhouse of Catros Gerand. We shall leave the description to M Vilmorin, writing in the 1870's:

"A handsome form of the Early Flat Purple-Top turnip,
remarkable for it's earliness, the regularity of the shape,
and the very deep colour of the upper part of the root."

The strain we have today is almost identical 130 years later, except that the leaves are less deeply cut . We like this one because it has a good flavour without being overwhelmingly strong, and because you can also eat the leaves cooked like spinach. (Not all varieties have nice-tasting leaves, but this one is particularly good.)

Seedcrop selected and grown for us by the good folks at Trill Farm Organic Garden. Always popular. 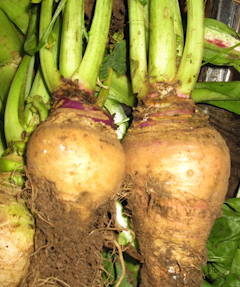 Gilfeathers' Turnip-Swede
Right, now we're quite proud of this one - even for us, this is pretty unusual. It's a natural cross between a turnip and a swede, found by John Gilfeather in his fields in the late 1800's.

Turnips and Swedes are closely related, but actually different species which normally do not cross at all. But very occasionally it can work, giving rise to a completely new type of vegetable - and it was just lucky that Mr Gilfeather spotted the unusual plant and decided to keep seed from it.

We were when we first heard of it, but in our never-ending quest to find you exciting new things to grow, we got some seed and tried it out - We were rather pleased with the results - this unique vegetable tastes neither of turnip nor swede, but has some of the flavour of each. It is good both boiled or mashed, and we will definitely grow it for our own household use in the future. 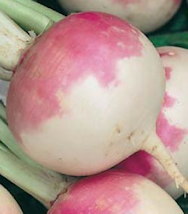 Norfolk Purple Turnip
This is a traditional turnip that was being grown in Norfolk around 1680, and originally popularised by Charles the 2nd Viscount Townshend.

He life was completely focussed on progress through turnips, often talking of nothing else, and becoming known as “Turnip Townshend” due to his obsession with the vegetable, which he used as the mainstay of his new "4-field Norfolk Rotation" on his estate.

Despite the scepticism of his peers, his rotation was based on very sound principles and these turnips turned out to be a crucial part of the agricultural revolution in the early 1700’s.

Now we have some seed so you can grow it at home. Still a very good turnip for the UK, even after all these years.

Turnips are from the Brassica family (Cabbages, Kales etc) and are really easy to save seed from. Yet another reason to learn to save Brassica seed - it's the same process for all, so learning one thing lets you save lots of different vegetable seed.

We would really like to encourage you to have a go at saving seed from brassica family - that's the cabbages, kales, oriental vegetables, broccoli and turnip family. We know many of you save obvious ones like tomato and lettuce seed, but we've noticed that in the past people shied away from doing the biennial vegetables (plants that flower in their second year).

Cheeringly, more people are saving brassica seed now - and we'd like to encourage you to try it too: its incredibly easy, and you get so much seed, you'll have loads to give away. There's really no need for example to buy Turnip seed from us every year at all. You just set aside a patch of good turnip plants (eat any rubbish ones) , and let them flower, making sure that you've got a reasonable number, that they are healthy, and that no other sorts are flowering nearby that might cross with them. You'll get lots of seed pods in August.

Many of the brassicas (turnips, cabbages, cauliflowers etc) will cross with each other very readily
- so only let one variety flower each year.

Flower stalks from a good-sized population are hung up to dry,
then broken open over a bowl (or old baby bath in this case!).

The bits of pod are screened out with a sieve or a soil riddle
- but you can instead winnow them off in a breeze pretty easily if you prefer.

Step-by-step instructions are here on our new brassica-seed-processing page.
And of course, seed-saving is only possible because these are all real, non-hybrid varieties.

It's pretty foolproof - why not give it a go?