We like tomatoes a lot, so this is a really important part of the catalogue for us.

We think much of the tomato seed offered commercially isn't really right for home growers.

What we want are varieties that germinate well in cold conditions,
start to set fruit early, and yet are still very productive over a long period,
with a really good 'tomato' flavour.

Vine tomatoes are on another page. For an explanation of the differences between bush & vine plant types,
and choosing tomatoes for outdoors growing, click here.

We have found some very quick-growing varieties, some from Russia. In our trials these had flowered before our others had grown their third leaf! Not only does this help get a better crop in a short summer, but you have more chance of them fruiting before blight strikes. We have listed these in approximate order of ripening.

As always, the earlier varieties have a slightly smaller yield. Grow more than one to cover a longer season. 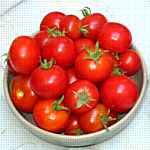 Latah (Super-early Salad type)
This is the one for your earliest crop. It might just be the best early tomato ever. It’s a super-early variety that tolerates short or cool summers, covered in 1 inch spherical red fruit on a sprawling bush.

Latah is our most popular bush tomato, and it really is remarkable. The leaves are very far-spaced on the stem - the plants look a bit odd – and this lets in more light to reach the fruit so they ripen even earlier. The fruit are mostly roundish but some are a bit ribbed, with the occasional odd shape too.

The plants are quite untidy. To be honest, you can't really train them or support them in any way – but if you let them get on with it they really will make ripe tasty tomatoes earlier than you thought possible. Fantastic flavour, balanced acid and sweetness, this is just great raw, & nice cooked too.

I had my first tomato appear on the Latah on the 18th May and it has just turned red (June 26th) . . . Never in my life have I had a tomato this early! well done all - Tracey Campbell

I live in the northern part of Norway (Helgeland) , and was excited to see how your seeds worked here. I was especially satisfied with the "Latah" tomato, which was not only my earliest to ripen last year, but also the best in taste ( I had 12 other varieties of tomato ) This is truly one of the best tomatoes I have ever tasted... - Andreas Taraldsen

I was a little wary of the claims that tomatoes are so early. But I can say that it is true. I planted my seeds the third week in February. Had the first flowers appearing on 30th April, and picked and ate my first tomato on 20th June.... The taste is wonderful, they are very sweet, if you like a sweet tomato you will really enjoy them. Their resistance to blight was fairly good as opposed to other varities that I grew, and they fruited heavily, for a long time. I was very impressed, and will definitely be growing them again next year. Thank you for introducing them to me. - Nick Steadman

CORRECTION: We originally thought this was from Russia, but several people have written to correct us. Bonnie Gomez wrote: "The Latah Tomato was developed in Latah County at the University of Idaho in Moscow, Idaho in the United States. We have a short growing season (just over 4 months of the year) in Northern Idaho and have unpredictable springs (i.e. frost and snow) and that's why "absurdly early" plants seem like a good idea! Thank you! "

An old favourite, back by popular demand. This is a really good producer of big pink tomatoes - halfway between a plum and an ox-heart type - with an excellent flavour.

The plants grow to around 3 or 4 foot tall and are easy to manage, they just keep on producing huge numbers of fruit all summer. We have bags and bags of tomatoes off these every time we grow them.

The heart-shaped fruit are shocking pink and have a good balance of sweet and acid. Like a giant plum tomato - good for sauces, but also very pretty in salads, or for making a lurid pink gazpacho soup.

A great success from our trials of early Siberian tomatoes, this one has a high yield of 2-inch, perfectly round red fruit. Large seed get the plants off to a vigorous start.

They fruit much earlier than normal tomatoes, and you get a good crop for your salads throughout the summer. The large sprawling bushes only grow about 3' tall, but definitely need several stakes or strings to support the weight of all the tomatoes. We use this as a salad tomato; its juicy with a good balance of sugar and acid. 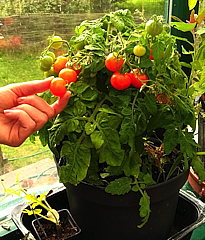 An amazing heirloom variety bred in Russia, then brought to Canada in the 1890s. This dwarf tomato plant has been bred for growing in pots on a windowsill - it makes a short and sturdy bush about 1ft tall that is heavily laden with round red cherry tomatoes.

It actually does better in a pot than in the ground, as it is so short and stocky. Back in circulation thanks to the work of Jenn Stotland and Annapolis Seeds , who specialise in northern-adapted varieties.

This variety comes originally from Siberia. As well as fruiting very early, it also germinates well at low temperatures.

It make loads of round red tomatoes with thick flesh, & is particularly good for cooking down into a rich sauce. The medium-large bushes don't sprawl so much but do need a little bit of support - perhaps a 2ft cane to tie it to. Good juicy fruit, excellent flavour.

Here you can see the seed and juice squeezed into a jar & let ferment for 3 days (no more, no less!)

(And, yes, it is supposed to be mouldy & smelly)

Water is added and poured off, several times over, to clean them, the seed is rinsed in a sieve and put on a plate to dry.

Detailed seed-saving instructions are included with your seeds, so you can do this yourself.

And of course this is only possible because these are all real, non-hybrid varieties.