Many people grow onions from seed as it is so much cheaper than from sets,
and the range of varieties available is better.

Onions won't germinate in cold soil, and need quite a long time to make a bulb,
so there are three times to sow onions from seed:

Easy Option 1 - Indoors
The usual and most reliable option is to sow indoors in trays very early in January or February, with some heat, so that they get going early enough to make nice big bulbs. They will grow on without heat (for example in a cold frame or unheated greenhouse) once germinated. Transplant out about 4"-6" apart once the soil warms up:

Easy Option 2 - Outdoors
The other common way is to sow seed outdoors directly, in this case you should wait until March or so when the soil has warmed up a bit. (Your onions will be a bit smaller as they've had a shorter growing season.) Thin your rows in stages to about 4"-6" apart as they grow:

Harder (but bigger onions) Option 3 - Overwinter
The final option - more of a gamble, but can give really large onions. You can sow seed outdoors in mid August, with a cold-hardy variety that will survive the winter outdoors. If successful, this can give an early crop of very large onions the next summer. If you want to do this, use Paris Early White or Augusta, listed at the bottom of the page.

The only other thing to remember is that Onions HATE shading.
If they get shaded by other plants like grass or weeds, they won't bulb properly. It's easy - just keep them well weeded. 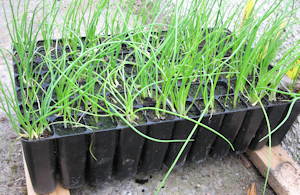 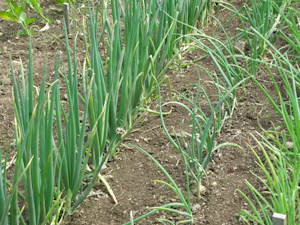 Right, now that's explained, on to the Onions! 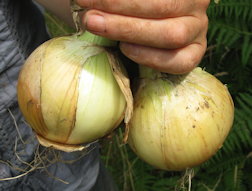 Yellow Rynsburger - LONG STORAGE
This is a very well known traditional deep yellow-brown onion with a high yield and nice dense bulbs. (The ones in the photo are just harvested, they turn a deeper colour once dried & stored.)

We have chosen it because it stores for a long time after harvest, so a great one for all your winter cooking.

Sow in spring for harvest in August/September, it will store overwinter.

One of the most-grown onions in the UK, because it keeps so well. 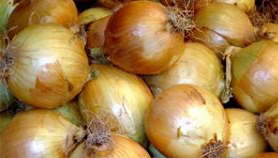 Liria
A traditional onion named after a town in Spain, where it has been grown for centuries. It has large round brown bulbs, that are sweet. We've found it to be a really reliable variety, producing a good harvest that is ready a little earlier than the Yellow Rynsburger, but still stores pretty well.

This does really well for us here in Wales and makes really nice big onions.

Normally sown in Spring for harvest in Autumn, but you can also try sowing it after midsummer as an overwintering onion.

After the grower retired, we have taken over seed production ourselves; just a few packets available each year. 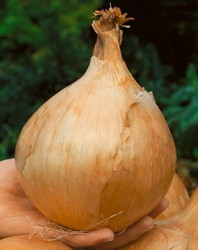 Globe Onion EASY HUGE ONIONS!
A variety that we've chosen because it produces really large spherical onions, with a mild flavour, so its really good for salads as well as cooking.

It can easily reach a pound in weight; we grew loads of them to eat and they all got pretty big without much effort.

Sow this in Spring for autumn harvest; use at start of winter (not a storage onion) 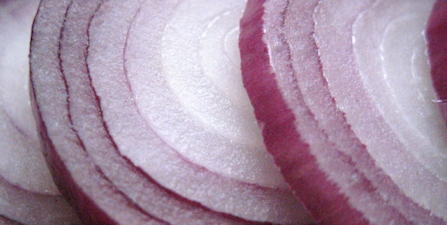 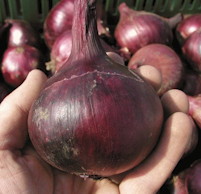 Carmen - RED
This is a nice red onion , adapated to many different soil types and growing conditions, which we have chosen because it is very sweet.

The round bulbs are a dark red colour, with a good red colour inside as well, and they store quite a long time after harvest (for a red onion at least).

Red sweet bulbs, Sow in Spring for autumn harvest. Use by midwinter. 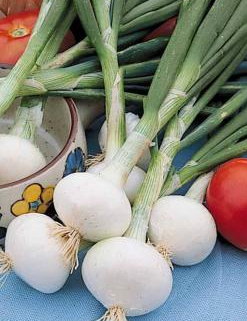 Early Paris White OVERWINTERING or EARLY SOWING
This cold-hardy onion is a good variety for overwintering, giving nice white onions in Spring when they are most appreciated. Not huge, but very cold hardy, and quite early.

Alternatively sow in spring to get small white bulb onions to use fresh, so you can do half your packet each way.

For full-size onions:
Sow it around Aug 18th in a closely-spaced row. At the start of October they will be a decent size and you just transplant them out to their final position spaced about 15cm apart. As soon as the weather improves in spring they'll be off and away, giving you earlier / larger onions than you would get otherwise.

For white bunching onions:
Sow in late spring and about 3 months later you'll get small white bulb onions with a long green top, use the whole thing (bulb and greens) chopped in salads or cooking.

Not a storage onion, this is one for eating fresh as and when you harvest it. 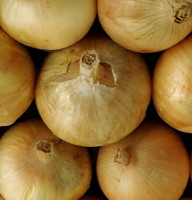 Augusta OVERWINTERING or EARLY SOWING
This is a large yellow cold-tolerant onion for overwinter growing: Sow it in late August for large bulbs the following year.

Alternatively sow in spring to get small yellow bulb onions to use fresh, so you can do half your packet each way.

For full-size onions:
Sow it around Aug 18th in a closely-spaced row. At the start of October they will be a decent size and you just transplant them out to their final position spaced about 15cm apart. As soon as the weather improves in spring they'll be off and away, giving you early large yellow onions.

For green bunching onions:
Sow in late spring and about 3 months later you'll get small yellow onions with a long green top, use the whole thing (bulb and greens) chopped in salads or cooking.

~ It is easy to grow SHALLOTS from Seed, too (Sow in Spring) ~ 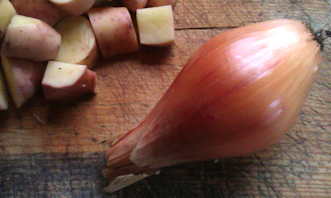 Zebrune Shallot RARE, & REALLY GOOD
This has been a real winner these last few years, outperforming our other onions by a noticeable margin. And they have a really good flavour, too. If we had to chose just one onion to grow, this would be it.

Shallots are similar to normal onions, but with a slightly different ancestry. They are narrower and longer, with a different mix of flavour compounds - less strongly 'oniony', and therefore sweeter & milder to taste.

They grow really well from seed, and Zebrune is a fairly modern variety; it makes bigger bulbs than traditional shallots, so there is less peeling to do, and it was deliberately selected for growing from seed rather than sets.

This kind is popularised on TV cookery shows as a 'banana shallot' (because it is slightly curved). Excellent in salads or cooked.

Unfortunately they do not make many seed, but we have still made up a packet that is pretty generous, while holding the price down as much as possible.

An easy, fine-flavoured, large, sweet & mild shallot. Sow in Spring, inside in heat if possible.