Parsnip seed is at the bottom of the page. But as you scroll down,
do consider the other two exciting plants we have here that are used very similarly.
These rare varieties of parsley and chicory have been bred over the centuries for their tasty roots.

Root Parsley is a new discovery for us that we are hoping you will all try out
as it is really nice, cold-hardy, and easy to grow.

Root Parsley is - as you might guess - parsley that has been bred to give a nice white root like a carrot.
It has a mild flavour and is slightly sweet, but not strong like parsnip. We really liked it.

We like this because it is easily grown, and stands overwinter, so it can help with your spring food supply for not much effort.

In the former Czechoslovakia, they grow and eat 100,000 tons a year. We found a Czech research paper comparing the taste, storage and growth of several different varieties, and we offer our choice from those:

"Atika" Root Parsley
A great modern variety from the former national plant breeding research station in the Czech Republic. It was bred for disease resistance, earliness, and fast root growth even in damp conditions.

The roots are carrot-shaped, about 22cm long, and have a white skin. They are cooked just like carrots and are very easy to grow - sow direct in a seedbed from March onwards - if you can grow normal parsley (which is pretty easy) you can grow this.

Tasty veg you should all try

Feedback: The best of the lot was the Atika. It's a slow burn but well worth the wait. I grew one 15' row. I lost some at the start of the season with cats and the 3-year old. But what was left was great. I had tonnes of tops for all sorts of things. I have a gallon of parsley wine ready to bottle now. It is interesting...that's all I'll say. I'll prime it in the bottle to encourage some yeast to give it a little sparkle and the yeastiness will complement the herb-savoury taste. It is a wonderful veg used like parsnip but I used all the forked and stringy ones in stocks, stews, and under roasting meats. It adds a savoury quality that fills out the flavour, especially in sauces. I also tried a dandelion coffee type thing...doesn't work. - Paul Fynn, feb 2012

Root Chicory is a special type of chicory that has been bred to give a nice white root used much like parsnip. 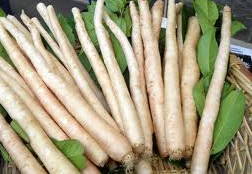 Here is a rare and very special type of chicory from Liguria in the north of Italy, which has been bred not for its leaves, but instead for its long conical roots (much like a parsnip) which are used as a vegetable - boiled, mashed or roasted.

According to cooking instructions in our copy of "The Vegetables, Fruit & Herbs of Italy, by Giacomo Castelvetro" (published in 1614) you should slice the roots lengthwise and cut out the more bitter ‘anima’ or soul! (which nowadays we call the core of course). Then cook just like a carrot or parsnip.

Chicory is very hardy and pretty easy to grow, so this should do well in most places. Sow it just like any other chicory, in early summer, for digging up the roots in autumn/winter.

Another adventurous veg for those who like to try something new!

A very well known traditional parsnip variety making large, strongly-flavoured conical white roots (much as you would expect from a parsnip, really!).

Our friend Tony Haigh is very fond of them, and tends to put them in everything, from curry to quiche. While this is a fantastic parsnip, we are not completely convinced about this, and think they are best roasted in the normal manner.

First roots ready from late August onwards, but we usually keep them in the ground until later in the year.

Leave a good number of only the very best and biggest roots in the ground overwinter for your seed crop,
otherwise you'll be keeping seed that tends to make small parsnips.

And pull up any that start to flower long before the others, you don't want to develop a strain that has a tendency to bolt!
One caution - do make sure to wear gloves and long sleeves when handling parsnip foliage & plants as they will really irritate your skin.

You can only let one variety go to seed each year, as they cross easily. Other than that, parsnip is very easy to save seed from,
and you'll get much better seed than you can buy - it doesn't keep or store well at all.

Radish and turnip also produce seed in their second year, so the process is similar.

Basic seed-saving instructions are included with your seeds, so you can do this yourself.
There are more detailed home-seed saving guides (printable) over to the left of this page,
in the box titled 'SeedSaving', with sheets on drying and storing your seed too.
And of course, seed-saving is only possible because these are all real, non-hybrid varieties.