What we have here is a fantastic root vegetable that everyone should try - don't think 'radish' as this vegetable bears no resemblance to a breakfast radish,
this is a large root you put in soups, stews and stir-fries.

Black Spanish Round LARGE WINTER RADISH FOR COOKING WITH

Please set aside any preconceptions you may have about 'radishes' - this is a large root vegetable that grows up to tennis-ball size, and keeps in the ground overwinter for you to pull up and use in soups, stews and stir-fries.

Although 'hot' when raw, that is not how it is used. The radish-heat disappears completely as soon as it is cooked, with a mild flavour that goes with almost everything.

We like it both in stir-fries, and also used like turnip or swede in soups and stews. What we don't understand is why everyone doesn't grow this sort of radish all the time!

Large cooking radish, grows to tennis-ball size. Incredibly easy to grow, just sow in July or later, for pulling up all winter.

"We have just started using a few of the HUGE Austrian winter radishes that we thought we would try. They make us laugh, they are soooo not like radishes! I thought it would be a case of a few bits disguised in a stew, but they are actually really nice.
Today we roasted some with a chicken and some parsnips and potatoes and they were lovely. We ate a few bits raw while we were prepping them, and they were not at all fibrous (yet!) and not hot, but with a radishey sort of juiceyness. Lovely" Clare Maple

Sow short rows of radish every 2-3 weeks to have a steady supply throughout the season. 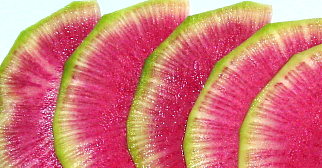 'Red Flesh' Mild Tricolour Radish
This is a beautiful radish which is really very mild - mild enough to use use raw in salads, or as a side-vegetable in its own right.

The flesh has this amazing red-purple centre, which shades out to the bright green outer layer, and then an almost white skin; we cut it in thin slices and spread them out on a plate as you would serve carrot sticks or cucumber.

Sow in late spring or summer: it withstands cold weather, standing well in the ground without damage.

Use it in salads, or cooked as a winter radish. 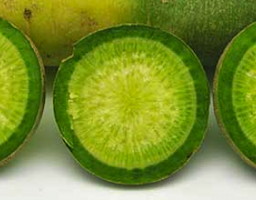 'Green Luobo' mild winter radish
An amazing heirloom from northern China: a mild winter radish, that has bright green flesh and a green/white skin. We only have a few packets this year as seed is really hard to get hold of.

Do not sow in Spring as it will just run to flower when the days get hotter. Sow after midsummer.

Use it in salads, or cooked as a winter radish. 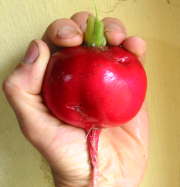 'Sicily Giant' radish
This is a normal round radish, but this time a deep red colour and not so hot.

From Sicily, and it really can get reasonably 'giant' - without any woodiness at all. You can of course pick it smaller if you want your radishes a less silly size.

The flavour is nice and sweet and so this is one for those who prefer a milder radish. (Though heat does vary with soil type, so beware!)

'Red Top' Radish
This is a nice large round Italian breakfast radish which we chose  from our 2008 trials.
It is red on top and white underneath, and has a particularly good flavour with a decent 'kick' to it.  Very nice in salads or salted and dipped in butter as a snack. 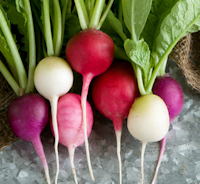 A mix of different coloured round radishes, for pretty salads.

Doesn't include any of the named varieties on this page, it is a mix of other types. 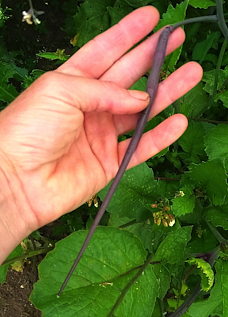 Grown for its edible immature seed pods, similar in texture to pea pods, but with the full flavor of radish. The true rattail variety has slim purple pods, the earliest being over a foot long with a glossy waxed sheen. Great in stirfies, salads and dips.

Originally from Prairie Garden Seeds, then improved by our friends at Wild Garden Seeds. This strain is truest to the original form described in the famous 1885 Vilmorin Seed Catalogue - if you scan the other so-called rattail offerings online, you'll see many just look like normal radish pods - but this one is the real thing!

Makes a lot of pod & not much seed, so a small packet, but you only need a few plants - you’re going to let them flower and make a 3ft flowering bush; just keep picking the pods and they will make more.