Between them all you should - with a bit of luck - have leeks for almost half the year.
Big packets, because we like to grow lots of leeks.

Sow leeks in a seedbed in spring, or sow in trays to get a good start away from the slugs.

~ Listed in order of harvest. ~

'Jaune de Poitou' Yellow Leek (Early)
A nice productive early leek for autumn harvest. We like this one because the yellow colour makes a great contrast in the garden.

This traditional leek from the west of France grows quickly. Get it in early, and it is then ready right at the start of the winter, making short fat leeks in Autumn.

It normally would be harvested before the really hard frosts start, as it is not as cold-hardy as the overwintering leeks below. 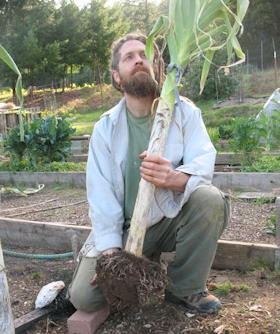 This is a wonderful leek, and one we grow every year to eat ourselves. The great thing about them is that they are exceptionally tall, meaning that you get much more usable leek for your work, and they are very clean to harvest and easy to prepare.

We first came across them in the wonderful blog of Steven Edholm - the second photo shows Steven with one of his Giant Bulgarian leeks. We've yet to get ours this big, but they really are exceptionally long shanked and quick growing.

Note that these are less cold hardy than some of our other varieties, so use them first before the worst of the winter frosts.

'Monstrueux de Carentan' Fat Leek
A traditional French variety of fat leeks for autumn/winter harvest, from the small town of Carentan in France, near to the English Channel.

Selected over the years for earlier, fatter leeks, at the cost of a tiny bit less cold-resistance. A good all-round leek, normally harvested in late autumn/early winter.

In a comparative trial against 'Musselburgh', it was noticeably more vigorous, growing faster & bigger, although the two varieties share a common ancestry.

A good one for standing overwinter even in atrocious weather.

Mézières Long Winter Leek
This is for those of you who prefer very long leeks. It is a very cold-hardy leek from the small town of Mézières, near Rennes in France, where they have cold winters, and so good for standing over winter and harvesting on into spring.

Don't be surprised that your longer leeks are a bit thinner than short fat ones: they're more stretched out!