Another easy vegetable -we've made up generous packets of great seed, but they are very heavy to post, hence the price.

The main sowing season is in early spring, for harvest in summer. (dark green)
Some varieties are also suitable for sowing in autumn for an early crop the following year. (pale green) 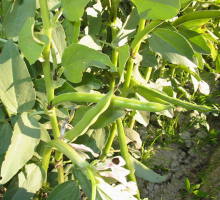 'Aquadulce Longpod' Broad Bean
The result of hundreds of years of breeding and improvement - in our vegetable gardening book of 1885 it is described as 'in the highest state of development'.

The plants grow to about 3ft tall, bearing long pods with large flat pale seed inside.

We like it because as well as a normal sowing in Spring, it is one of the most commonly used varieties for sowing in Autumn to give an early crop the next year. In a mild winter the small plants will survive the cold and make a super-early start the following year.

Alternatively, if you don't want to risk the winter cold, you can sow in Spring as usual and you'll get a great harvest, just a few weeks later.

Traditional broad bean, this one is hardy enough to sow in autumn for an early crop the next year. 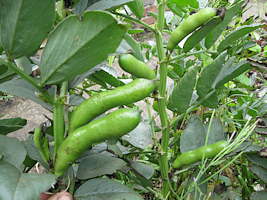 Field beans are smaller more robust relatives of Broad Beans. The beans are about 1/2 the size of a normal broad bean, and the plants are full size, bearing huge numbers of pods with 3 or 4 seed packed closely together. The overall effect is usually a higher yield of beans from the same size plot.

'Wizard' is a modern pale-skinned variety which has been bred for table use and is very cold hardy, surviving over harsh winters when others die off.

It has particularly good flavour even when the seeds get mature, and does very well for everyone, cropping over a longer period than broad beans.

PLEASE NOTE! This batch of Wizard germinates well but shows a lot of insect damage.
Many seeds have a small hole where a beetle chewed on it before harvest; it flew away long ago, and the holes do not in any way affect the germination of the seed. They do look bad, even though they grow fine - the beans have evolved to cope with this and just wall off the nibbled bit.
Normally we would throw the bulk away and get some more, but the recent new 2020 harvest all across the UK has been terrible. So this is your only choice if you want to have Wizard field beans - we have tested it and it grows fine despite the appearance.

Tasty.Very hardy. Good for an autumn sowing in October. Note that seeds are a bit holey. 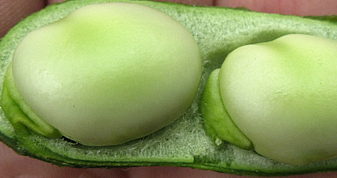 FEEDBACK: Once again you have introduced me to a marvellous vegetable which is cropping heroically despite this years difficult weather. Wizard has exceeded my expectations - I have never had much success growing broad beans but these delicious little field beans seem a much better option. I sowed two batches about a month apart and in mid-August am still picking beans. Blackfly have not been a big problem though I do allow docks to grow, which the blackfly prefer.
Favourite recipe - Giant couscous with peas and beans, dressed with olive oil, lemon juice and parsley, nothing more is needed! Thank you again for your inspiring vision, Sue 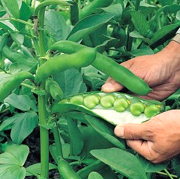 This is very popular old heirloom from Leiden in Holland , a fine example of the 'Bunyards Exhibition' type with particularly long pods. It gives a good yield of beans from a small space.

Ideal for a spring sowing (February through to late April), with early sowings best started in modules to avoid mice and slugs.